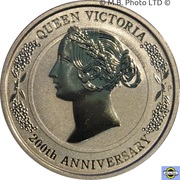 Sydney Type II effigy of Queen Victoria. The portrait portrays the Queen with wreaths of banksia in her hair. The coin border displays decorative wattle branches

Leonard Charles Wyon was a British engraver of the Victorian era most notable for his work on the gold and silver coinage struck for the Golden Jubilee of Queen Victoria in 1887 and the bronze coinage of 1860 with the second head portrait, in use from 1860 to 1894.

Struck by the Perth Mint but issued exclusively by Australia Post in PNC Issue 18 of 2019.

Born Alexandrina Victoria on 24 May 1819, in Kensington Palace, London. Fifth heir to the throne, Victoria became Queen of the United Kingdom on the death of her uncle, William IV, on 20 June 1837. Her coronation was at Westminster Abbey on 28 June 1838. Prime Minister Lord Melbourne became a key figure in advising the inexperienced young Queen, and Queen Victoria soon learnt to exercise her influence on ministers and policy during a reign that coincided with Great Britain's immense economic, industrial and imperial expansion. Queen Victoria married Prince Albert in 1840, with whom she had nine children. Victoria survived eight attempted assassinations during a reign of more than 63 years. Following her death, on 22 January 1901, she was succeeded by Edward VII.