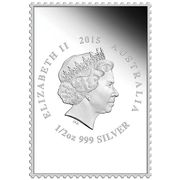 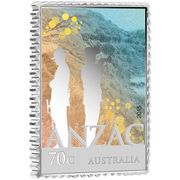 The reverse depicts the silhouettes of an Australian and a New Zealand soldier against the rugged hills of the Gallipoli peninsula at Anzac Cove in colour. It also features sprigs of Golden Wattle, monetary denomination and the words ‘ANZAC’ and ‘Australia’.

In April 1915, just eight months after Britain declared war on Germany on 4 August 1914, soldiers from Australia and New Zealand – organised into the Australian and New Zealand Army Corps (ANZAC) – landed on the Gallipoli peninsula, with the aim of assisting in the allied effort to command the Dardanelles and to knock Ottoman Turkey out of the war.

Gallipoli was a costly military failure for the allies, but from the loss the Anzac legend was born. ANZAC soldiers had battled heroically and gained a compelling place in the national psyche of their home countries. Theirs was a story of courage and endurance in the face of death and despair. Their initiative, mateship, humour, endurance, bravery and sacrifice in times of extreme adversity created a lasting sense of national identity for both Australia and New Zealand.

The coin was only released as part of this dual Australia/New Zealand limited edition set. 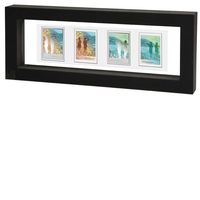 Bullion value: 14.05 USD Search tips
This value is given for information purpose only. It is based on a price of silver at 903 USD/kg. Numista does not buy or sell coins or metal.