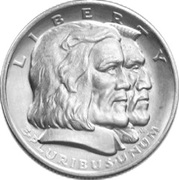 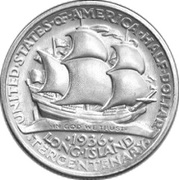 A Dutch settler and an Algonquin Native American. The heads are partially imposed on each other, to infer the harmonious balance of a peaceful settlement.

Of the many commemorative issues for the year, the 1936 Long Island Tercentenary Half Dollar had the highest total distribution. A total of 81,826 coins out of the 100,000 maximum mintage were ultimately sold to collectors and enthusiastic residents of the area.

The coins were authorized to commemorate the 300th anniversary of the settlement of Long Island by Dutch colonists. Designs for the coin were created by Howard Kenneth Weinman, the son of Adolph A Weinman, who had designed the Winged Liberty Dime and Walking Liberty Half Dollar.

The original issue price for the Long Island Half Dollars was $1, with the coins available through the Long Island Tercentenary Committee. Despite the high mintage, the number of gem condition survivors is somewhat low. Frequently encountered problems include bag marks or abrasions on the high points of the coin, the cheek of the Dutch settler on the obverse, and the sails of the ship on the reverse.

Members from this site want to exchange it: eljunquito52, Andrey78