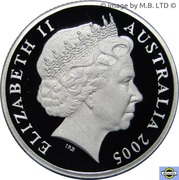 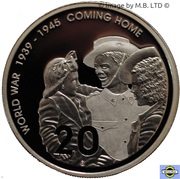 The actual coin commemorates the 60th anniversary of the end of World War 2. This design was inspired by a photograph in the Australian War Memorial collection of a soldier returning home to his family.

Bullion value: 11.35 USD Search tips
This value is given for information purpose only. It is based on a price of silver at 850 USD/kg. Numista does not buy or sell coins or metal.