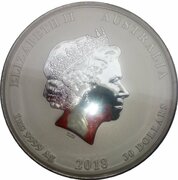 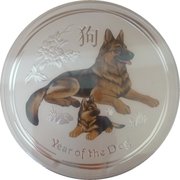 Year of the dog

Coloured german shepherd dog and pup lying in grass, Chinese peony flowers in the background. The Dog has a blue sapphire set into his eye. Chinese character for Dog above.

This was the eleventh Fine Silver (.999) coin in the Second Lunar Series Issued by the Perth Mint.

The picture of this coin is the Colourised and Jewelled version of this Perth Mint Silver Bullion Coin. 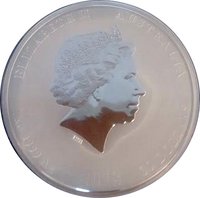 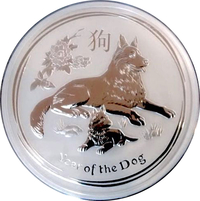 Bullion value: 879.18 USD Search tips
This value is given for information purpose only. It is based on a price of silver at 880 USD/kg. Numista does not buy or sell coins or metal.