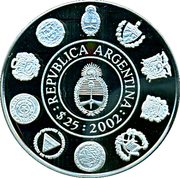 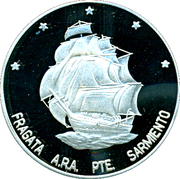 In the Argentine National Shield field between two lines round the
Legend "Argentina Republic: 2002: $ 25," Shields surrounded by countries Participants of the V Iberoamerican Series Coin.

In the field the figure of President Domingo Faustino Sarmiento Fragata. Legend Edge "FRAGATA A. R. A. PTE. SARMIENTO "and the five-star superior perimeter five-pointed mean walking five continents each year the boat in the graduation trip of cadets.

Coins for the foreign market were minted at the Royal Mint FNMT (CJ # 10.4.4). The fifth issue of the Ibero-American Series "Encounter of Two Worlds" is dedicated to sailing. The collection consists of 10 coins, one for each of the participating countries and a medal commemorating the 10th anniversary of the series.

CJ# 10.4.1 Is the easiest to detect, since the frigate is minted with a frosted surface that contrasts with the brightness of the others. Besides holding the capes mainsail show interruptions in its path such which with the image. 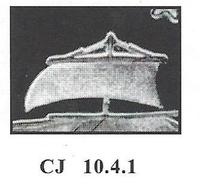 CJ# 10.4.2 Is the only one that presents the lower stars flanking the frigate, parallel to its axis and with neatly carved contours.

CJ# 10.4.4 The Mirroring and the definition of their strokes, forecastle detail, make it unmistakable.

Bullion value: 22.67 USD Search tips
This value is given for information purpose only. It is based on a price of silver at 901 USD/kg. Numista does not buy or sell coins or metal.