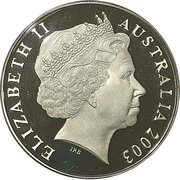 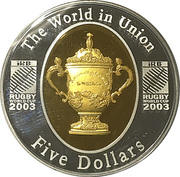 The gold plated oval in the middle of the coin shows the William Webb Ellis Cup, the trophy awarded to the winning team of the Rugby World Cup. This is surrounded by silver showing the IRB (International Rugby Board) logo of a leaning football and the word iRB above it and Rugby World Cup 2003 below the football.

This Fine Silver (.999) Selectively Gold Plated Proof NCLT coin was issued by the RAM to commemorate the hosting of the Rugby World Cup by Australia in 2003.

It was at the 1985 meeting that the International Rugby board (IRB) approved for the inaugural Rugby World Cup to be jointly staged in Australia and New Zealand in 1987. Subsequent Tournaments have been held every four years. The UK & France in 1991, South Africa in 1995, Wales in 1999. Australia was the sole host in 2003 with the final being played at the Telstra Stadium in Sydney.