Stamp shaped coin. Top half silver with coloured Australian Flag above coloured Olympic Rings and 50c in lower left corner.
Bottom half coloured with Chinese Dragon, AUSTRALIA written vertically down right side with solid red strip, and Beijing 2008 written above the dragon.

Perforation teeth (to mimic a Stamp) 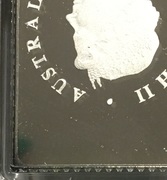 Australia’s first legal tender Stamp-shaped Coin (“Stamp-Coin”) is issued with Australia Post’s 2008 Stamp release celebrating the Beijing Olympics. It is a copy of the 2008 Beijing Olympics 50c commemorative stamp designed by Lynda Warner.
The number 8 is auspicious for the Chinese, so the Stamp-Coin is appropriately limited to a lucky number - 8000.
The Stamp-Coin and matching Stamp are in a boxed presentation folder that forms a triangle desk display.
Issued by Perth Mint.