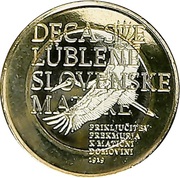 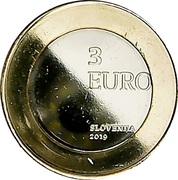 Centenary of Prekmurje rejoining its homeland

By issuing the latest collector coins the Bank of Slovenia seeks to add special weight to 17 August, the national holiday. On that day a hundred years ago the Yugoslav Army, which had occupied the Slovene regional territory of Prekmurje and Porabje on 12 August 1919 without resistance, handed over the territory to the civilian authorities. This reunited the Slovenes of Prekmurje with the rest of the nation, after eight centuries of Hungarian rule.

The subject, i.e. the incorporation of Prekmurje into the homeland, is depicted with a quote from Jožef Klekl the Elder, a writer and supporter of Slovene nationhood, from the 17 August 1919 issue of the local newspaper Novine: "Deca ste lüblene slovenske matere” (“You are children of the beloved Slovene mother”). This is interwoven with the figural depiction of a stork on the wing, flying from east to west and thereby symbolising the incorporation. The stork represents one of the more prominent symbols of Prekmurje, while also, as the designer of the image Matej Ramšak explains, representing rebirth and protection.

Translation: You are children of the beloved Slovene mother

Despite being a non-circulating coin, all Slovenian 3 EUR coins are accepted as legal tender in Slovenia.