Admiral Gaspard de Coligny (COLIGNY) 1519-1572 and Wilem I Prince of Orange (WILLIAM THE SILENT) 1533-1584, Although they were not involved in the settlement, they were viewed as leaders in the struggle for religious freedom. 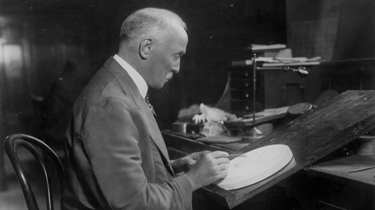 The Nieuw Netherlandt sailing ship on the Hudson River.

Issued to celebrate the 300th anniversary of the settlement of New Netherlands, the 1924 Huguenot Walloon Tercentenary Half Dollar was the only commemorative coin released for the year. The following year would see the issuance of coins under four different programs, the greatest number to date, although it would later be exceeded.

The subject of commemoration was the founding of New Netherlands, now New York, by a group of Dutch colonists in 1624. A church group known as the Huguenot-Walloon New Netherland Commission sought the commemorative coin program, which was eventually approved. There was some controversy about the role of government in creating a fund raiser  for a private church group, although the program proceeded.

A quantity of 300,000 of the 1924 Huguenot-Walloon Tercentenary Half Dollars were authorized. Ultimately, 142,080 pieces were struck at the Philadelphia Mint and distributed for the issue price of $1.

Members from this site want to exchange it: eljunquito52, aporellos