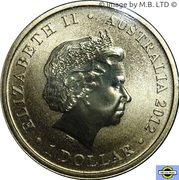 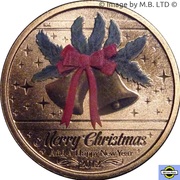 Two golden Christmas bells tied with a red ribbon and Christmas Tree greenery surrounded by stars. The wording is on the bottom third of the coin.

This NCLT Coin was struck by the Perth Mint but issued exclusively by Australia Post in a Postal Numismatic Cover with ‘P’ Mintmark. Australia Post Seal of Authenticity and official number on the back of the PNC.