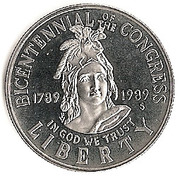 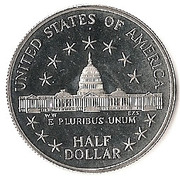 200th Anniversary of the Congress

A close up of the bust of Thomas Crawford’s Statue of Freedom, which is found at the peak of the Capital Dome.

Lettering:
BICENTENNIAL OF THE CONGRESS
1789 1989
IN GOD WE TRUST
LIBERTY

A full view of the Capitol Building accentuated with seven stars above and three stars to each side below.

The 1989 Congress Bicentennial Half Dollar was issued to mark the 200th anniversary of the operation of Congress under the U.S. Constitution. This was one of three coins issued under the program, which also included a silver dollar and $5 gold coin. Surcharges from the sale of coins went to the Capitol Preservation Fund.