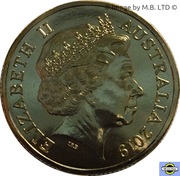 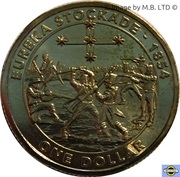 This NCLT Aluminium-bronze commemorative $1 coin produced by the RAM is the third coin in a set of three that will recognise Mutiny and Rebellion in the South Pacific and Australia between 1789 and 1854. This particular coin is about the Eureka Stockade Uprising and was issued in a large coincard. 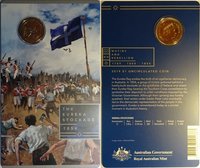 An Australia Post PNC was also issued that included this coin. It was limited to 500 copies and was released at the ANDA Melbourne Money EXPO in August. 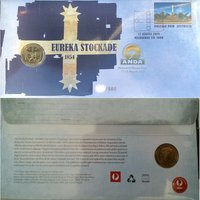 A further Prestige PNC issue of only 200 copies will be released in November 2019 by Australia Post.

In 1854 a group of miners gathered behind a hastily-built stockade on the goldfields of Ballarat and raised the Eureka Flag; bearing the Southern Cross constellation to symbolise their objection to unfair conditions imposed by the Victorian Government. although their uprising was harshly quashed, their action under leader Peter Lalor eventually led to the democratic representation of the people in the government. Eureka is remembered today as a pivotal moment in Australia's history.