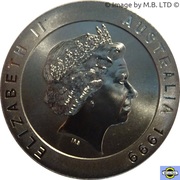 Coins of the Snowy Mountains Scheme

A construction worker set in front of a Dam Wall & Alpine Lake with Mountains in the background.
Wording & denomination set in an outer rim.

The RAM released this NCLT Fine Silver (.999) coin in 1999 as part of a 2 coin reverse frosted proof set.
The set was commemorating the Snowy Mountains Scheme and this coin featured one of the many Alpine Lake Dams that were constructed as part of the scheme.
The second coin features construction of tunnels built to connect the many parts of the scheme together.