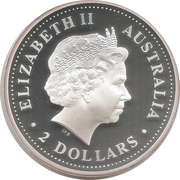 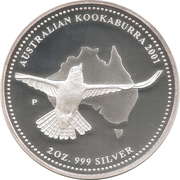 Soaring Kookaburra superimposed over a map of Australia.

Released by the Perth Mint this 2002 4 coin set of Privy marks is also known as the Palindrome set as the date is the same in either direction.

Bullion value: 51.92 USD Search tips
This value is given for information purpose only. It is based on a price of silver at 835 USD/kg. Numista does not buy or sell coins or metal.