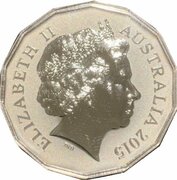 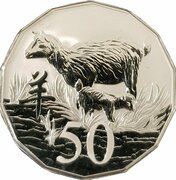 Released by the Royal Australian Mint in 2015, this is the fourth NCLT Lunar coin in this tetradecagonal 50 cents series. Struck in .999 fine silver and finished with a frosted proof finish, this coin is engraved with Chinese lunar symbol of the goat on the reverse and Ian Rank-Broadley effigy of Queen Elizabeth II on the obverse.

The coin is encapsulated and presented in a velvet lined blue box with an accompanying certificate of authenticity. 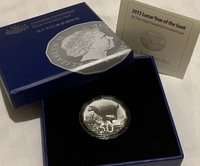 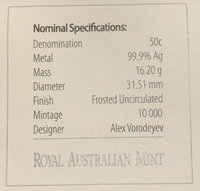 A Copper-nickel version of the coin was released in a coincard.

Bullion value: 13.42 USD Search tips
This value is given for information purpose only. It is based on a price of silver at 829 USD/kg. Numista does not buy or sell coins or metal.