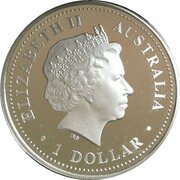 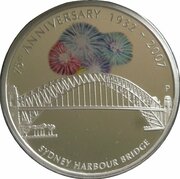 The reverse depicts the Sydney Harbour Bridge and a burst of fireworks in colour. The Perth Mint 'P' mintmark and the 2007 year date.

The construction of the world's largest steel arch bridge, which has a total length of 1,149 metres and an arch span of 503 metres, required almost 53,000 tonnes of steel and six million rivets. Spanning the sparkling waters of Port Jackson between Dawes Point and Milsons Point, the 'coathanger', as it is known, is an engineering icon and an instantly recognisable symbol of Australia.