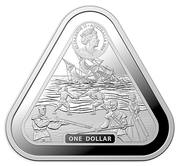 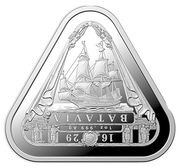 6th portrait of Her Majesty Queen Elizabeth II facing right wearing the King George IV State Diadem and the Victorian Coronation Necklace. Also depicted is the fighting between the survivors as a result of the mutiny and the Batavia before its ultimate demise.

Jody Clark is a British engraver employed by the Royal Mint, notable for designing the fifth and latest portrait of Queen Elizabeth II to feature on coins of the pound sterling.
Adam Ball is a designer with the Royal Australian mint.

The exquisite design of the reverse conveys two scenes to communicate the journey of the Batavia. With the image of the ship viewed upright, the Batavia is shown setting sail in its full glory. Flipping the coin to view the text of ‘1629’ and ‘Batavia’ upright depicts the ship in its final state capsized shortly after wrecking in 1629. The border encompassing the main design also incorporates unique design elements from the Batavia.

Text is upside down.

This NCLT Fine Silver (.999) $1 triangular shaped coin is the first release in a four coin series of Australian Shipwrecks to be released by the Royal Australian Mint.