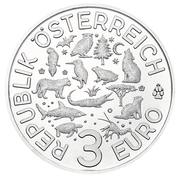 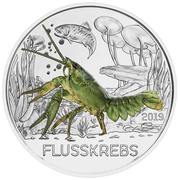 All the animals of the series in miniature

The colorful and bright crayfish in its natural environment. 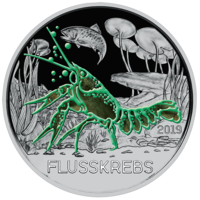 Three years since enthusiasts keen to get their hands on the much-coveted Colourful Creatures coins began queueing outside the Austrian Mint shop on the day of issue, the bestselling series is now drawing to a close in the shape of the Crayfish, the twelfth and final glow-in-the-dark coin in the series.

Freshwater relatives of the much bigger lobster, which they resemble closely, crayfish live only in unpolluted streams, river and lakes as they cannot tolerate contaminated water sources. For this reason, although once abundant throughout the continent, the European crayfish, also known as the noble crayfish, has seen its numbers dwindle. Moreover, it is susceptible to the crayfish plague carried by the invasive North American signal crayfish, so is listed as a vulnerable species on the IUCN Red List. A traditional food source, particularly in Scandinavia, the European crayfish is generally considered to be the finest edible crayfish. The Crayfish features all 12 animals in the Colourful Creatures series in silhouette on its obverse, while a colour-printed crayfish is shown on the coin’s glow-in-the-dark reverse. The first ever Austrian 3 euro coins, Colourful Creatures are legal tender in Austria.