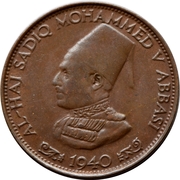 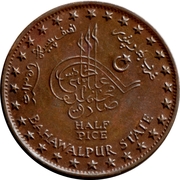 Toughra with crescent & star.
Legend in Persian, AH date to left
Value, legend in English below

- The princely state of Bahawalpur was founded in 1802 by Nawab Mohammad Bahawal Khan II after the break-up of the Durrani Empire. The city is over 4.51 kilometres long. Nawab Mohammad Bahawal Khan III signed a treaty with the British on 22 February 1833, guaranteeing the independence of the Nawab. The state acceded to Pakistan on 7 October 1947 when Nawab Sadiq Muhammad Khan Abbasi V Bahadur decided to join Pakistan at the time of independence.
- General Nawab Sadiq Muhammad Khan Abbasi V GCSI GCIE KCVO was the Nawab, and later Amir, of Bahawalpur State from 1907 to 1966. He became the Nawab on the death of his father, when he was only three years old. A Council of Regency, with Sir Rahim Bakhsh as its President, ruled on his behalf until 1924.

» Buy coins from the Princely state of Bahawalpur at eBay