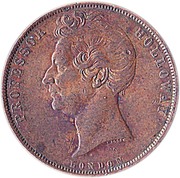 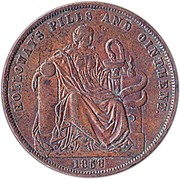 The bust of Thomas Holloway facing left, with J.MOORE (the maker's name) on neck truncation.

Hygeia (the ancient Greek goddess of health) seated between two pedestals and facing right, with her right foot resting on a stool. The pedestal on the left is surmounted by an orb and that on the right by a flame. A snake is climbing up this pedestal and drinking out of a cup held in Hygeia's left hand. J.M. (the maker's initials) on the base at the right.

Thomas "Professor" Holloway was a colorful advertising genius and purveyor of pills and ointments in 19th century Europe. (see https://en.wikipedia.org/wiki/Thomas_Holloway)

Copper penny and halfpenny tokens were Issued to promote Professor Holloway's pills and ointments. Holloway tokens are presumed to have been circulated worldwide throughout retailers of Holloway products.
These tokens were produced in large numbers. They were used as currency in London, though the majority were sent to Australia where they are regarded as having formed part of the early currency of the colony.
Mint: Joseph Moore, London, 1857-1858 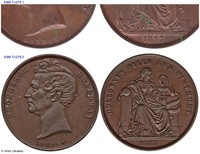