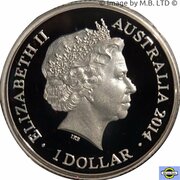 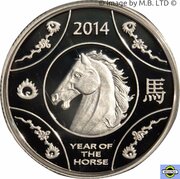 Horses head inside inner circle with authentic Chinese symbols all in a symetrical design, Chinese character for horse to right

In 2007 the RAM launched an on-going series of Fine Silver (.999) NCLT Proof one dollar coins depicting each Lunar year and their representative animals. The series ran until 2018. This 2014 dated eighth coin in the series was issued in a capsule in a plush square red box. 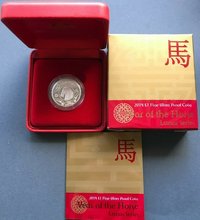 The Chinese Zodiac is based on a twelve year cycle, each year being represented by an animal. People born in the "Year of the Horse" are good to be around because of their high spirits and energy.  However they can sometimes be selfish, cunning and egotistical. They are impatient and not to be trusted with a secret.

Bullion value: 9.70 USD Search tips
This value is given for information purpose only. It is based on a price of silver at 833 USD/kg. Numista does not buy or sell coins or metal.