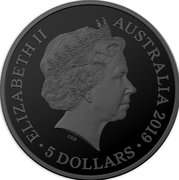 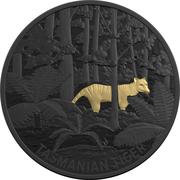 This NCLT Silver (.999) Proof coin was released by the RAM to commemorate Tasmania's magnificent  and well-preserved environment was formerly the habitat of a shy, distinctively striped carnivorous marsupial. The thylacine, or Tasmanian Tiger may have become extinct in the 1930s, but it is still one of Tasmania's best known animals. Frequently represented in art and literature, the thylacine is a poignant reminder of Tasmania's unspoiled beauty.