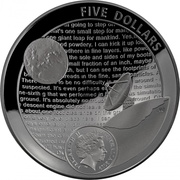 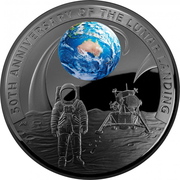 The obverse of the coin depicts the famous CSIRO Parkes radio telescope pointed towards the Moon, from which it is receiving television signals of the Apollo 11 lunar landing. The text in the background is an excerpt from the transcript of Commander Neil Armstrong’s journal of the lunar landing. 4th portrait of Queen Elizabeth II facing right wearing the Girls of Great Britain and Ireland Tiara set into a circle at the base of the design.

The reverse of the new coins depicts one of the Apollo 11 astronauts standing on the surface of the Moon, with the lunar module Eagle in the background. The Earth, visible in colour, in the sky behind the astronaut, shows Australia directly facing the Moon. A representation of the long journey taken by the Apollo 11 crew from Earth to the Moon is traced in the sky.

Australian ingenuity and technology played a major role in receiving and transmitting the television of this historic event. Radio antennas at NASA's Honeysuckle Creek Station ACT and CSIRO's Parkes Observatory NSW (pictured) were in position to share the televised broadcast with the world. Fifty years later, the Apollo 11 Lunar Landing is still regarded as a triumph of human endeavour.
This the world's first dome-shaped coloured nickel plated silver coin.