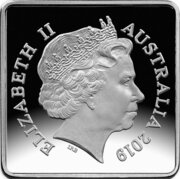 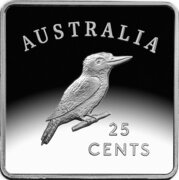 Released in a boxed set of 3 Fine Silver (.999) Proof coins is this replica of the original trial 25 cent coin that was never issued.

In 1919, the Australian Government proposed to replace pennies and halfpennies with square coins featuring a Kookaburra on their reverse. The Royal Mint trialed a series of square coins featuring the Laughing Kookaburra on their reverse. Approximately 200 of these trial pieces were produced, in thirteen different ''types'' between 1919-1921. In the end, the Kookaburra pennies and halfpennies never reached circulation. The Australian public resisted the change and elderly people were concerned by the small size of the coins. Furthermore, there were technical difficulties - the coins did not work in vending machines that were becoming popular, and the hard alloy made them more costly to produce. These trial pieces were never circulated but they were destined to become some of Australia’s rarest and most valued numismatic collectibles.

Bullion value: 6.06 USD Search tips
This value is given for information purpose only. It is based on a price of silver at 779 USD/kg. Numista does not buy or sell coins or metal.