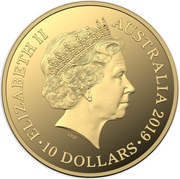 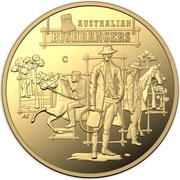 In 2019 the RAM released this NCLT Fine Gold (.999) Proof Coin to Commemorate Australia's Bushranger Era. The coin was issued in very limited numbers in a capsule held within a plush black box with numbered certificate. It has a "C" Mintmark.

Colonial Australia was a dangerous place, with lawless renegades known as bushrangers haunting the roads and settlements. One story tells of the extraordinary John Francis Peggotty, known as the ‘Birdman of the Coorong’: a distinctive figure who held up travellers from the back of a riding ostrich. With this Gold Proof Coin, the Royal Australian Mint recalls Australia’s legendary bushrangers and their legacy of art, folklore and identity.

Bullion value: 173.44 USD Search tips
This value is given for information purpose only. It is based on a price of gold at 55,775 USD/kg. Numista does not buy or sell coins or metal.