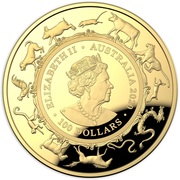 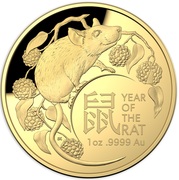 Released by the RAM for a purchase price of $2995 is this 38.51mm Fine Gold (.999au) coin commemorating the Chinese Lunar Year of the Rat.

According to Chinese tradition, the Emperor of Heaven challenged the animals to a race. The smart, persuasive Rat hitched a ride with the Ox and won the honour of being the first sign of the twelve-year lunar calendar. This stunning $100 gold domed coin celebrates the 2020 Year of the Rat.

Bullion value: 1,734.42 USD Search tips
This value is given for information purpose only. It is based on a price of gold at 55,775 USD/kg. Numista does not buy or sell coins or metal.