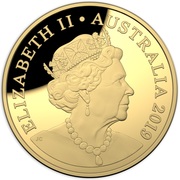 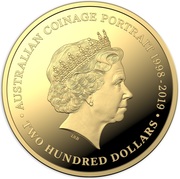 Released by the RAM this Fine Gold (.999au) $200 coin commemorates the use of Ian Rank-Broadley's portrait of the Queen used on Australian coins from 1998 to 2019. In Australia and the UK this was widely known as the "4th Portrait".  In effect this appears to be a two headed coin because the IRB Obverse has been used on the Reverse of this coin.

This is why the new effigy by Jody Clark as depicted on this coin to be used on Australian coins from 2019 is known as the 6th effigy (or 6th Portrait).

Bullion value: 3,592.83 USD Search tips
This value is given for information purpose only. It is based on a price of gold at 57,763 USD/kg. Numista does not buy or sell coins or metal.