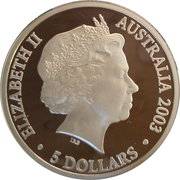 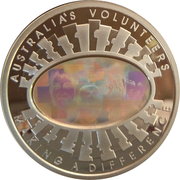 Surrounding the hologram is an intricate combination of interlocking patterns, representative of our society working together.

This coin is the final coin in the three-coin 'Finale' series. It depicts the valuable work done by Australia's volunteers. The main hologram image of three ordinary Australians faces indicates that anyone can be a volunteer. Tilting the coin, an array of volunteer activities is seen through symbols, such as fire, SES tape, the Red Cross, child care and conservation. Too many volunteer activities exist to include all of them on a single coin.

Bullion value: 28.32 USD Search tips
This value is given for information purpose only. It is based on a price of silver at 781 USD/kg. Numista does not buy or sell coins or metal.