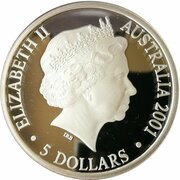 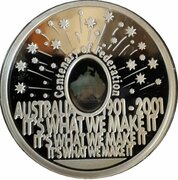 Central holographic oval surrounded by lettering with lettering underneath. Top half of coin has a depiction of fireworks.

This coin is the first Australian coin to feature a hologram or an Optically Variable Device (OVD). Forming part of the reverse design, the hologram reflects the Rotunda from the Inauguration Ceremony on January 1st 1901 in Centennial Park, Sydney, and a map of Australia with the States and Territories visible on the second reflection.
The unique optically variable image on this coin was produced through a collaboration between the Royal Australian Mint and the Commonwealth Scientific and Industrial Research Organisation (CSIRO).  The optically variable properties of the image are due to the extremely fine scale pattern of ridges covering the area of the image. This ridge pattern or 'diffraction grating' causes the light striking the image to be split into its component colours according to the spacing of the ridges in different parts of the image. The  optically variable image technology known under the trademark EXELGRAM was developed by CSIRO for anti-counterfeiting application.

Bullion value: 31.11 USD Search tips
This value is given for information purpose only. It is based on a price of silver at 858 USD/kg. Numista does not buy or sell coins or metal.