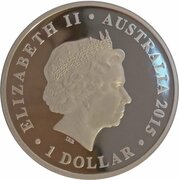 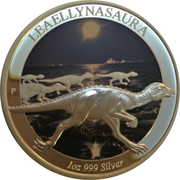 Depiction of the Australian dinosaur Leaellynasaura amicagraphica set against a starlit prehistoric scene. P mint mark and the designer's initials (TV) are also on the coin.

Leaellynasaura is a genus of small ornithischian dinosaur from the Albian-Aptian Epochs of the Cretaceous Period between 118 and 110 million years ago. First discovered in 1987 at Dinosaur Cove in Victoria, it was named after Leaellyn Rich, the daughter of Dr Tom Rich and Dr Patricia Vickers-Rich who organised digs with teams of volunteers on Victoria's rugged southern coastline.
Third of a five coin set.

Bullion value: 26.82 USD Search tips
This value is given for information purpose only. It is based on a price of silver at 862 USD/kg. Numista does not buy or sell coins or metal.