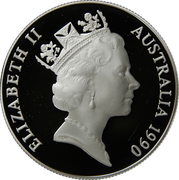 Cockatoo with wings outstretched and comb erect sitting on a branch. Engraver's initials are on the lower branch near the final split. Overlapping HH.

The sulphur-crested Cockatoo is well known to most Australians and is a familiar sight in heavily-timbered mountain ranges, open forests, paddocks, timber bordering watercourses, even towns and cities. The bird is usually seen in pairs or large flocks and its raucous ear-splitting screech makes it a very distinctive Australian.

Bullion value: 31.74 USD Search tips
This value is given for information purpose only. It is based on a price of silver at 858 USD/kg. Numista does not buy or sell coins or metal.