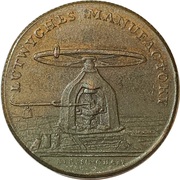 Justice seated holding scales and pouring money from cornucopia. Shield to the right of Justice. Lettering above and on shield, lettering in exergue.

Old-style coining press. Lettering above and in exergue.

William Lutwyche, (1754-1801), toymaker, later token manufacturer, Temple Row and St Philip churchyard. Lutwyche was active in the production of tokens from 1791 until 1801 and seems to have had more individual commissions for than any other manufacturer. His output of more than 65 tons of "legitimate provincial coins"  was exceeded only by that of Thomas Williams, the consortium of Westwood and Hancock, and that of Matthew Boulton. He frequently combined dies then in his posession to produce various mules, concocted numerous specious issues, and has been attributed with manufacturing the bulk of evasions and lighweight coppers that appeared toward the end of the 18th century.