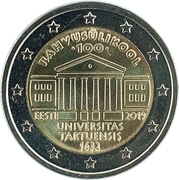 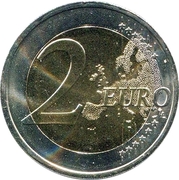 A motif of the main building of Tartu University in the center and also bears the inscriptions ‘RAHVUSÜLIKOOL 100’ (National University 100) and ‘UNIVERSITAS TARTUENSIS’, the year ‘1632’, the issuing country ‘EESTI’ and the date at the bottom. The coin’s outer ring depicts the 12 stars of the European flag.