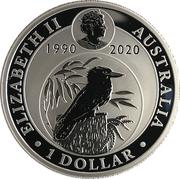 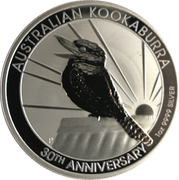 Kookaburra on a tree stump surrounded by native foliage with the 6th crowned portrait of HM Queen Elizabeth II facing right, wearing the George IV State Diadem and the Victorian Coronation Necklace, date above and value of coin below.

Kookaburra perched on a roof with Sun in background.

The Australian Silver Kookaburra series from the Perth Mint began in 1990 and is the longest-running bullion program from the mint. Each year has a different design of a kookaburra on the reverse.

The laughing Kookaburra is the largest member of the kingfisher species, and a bird synonymous with the Australian bush. This bird species is indigenous to Australia and is known for their call, which is said to sound like echoing human laughter.

It was also planned to be released at the cancelled Brisbane ANDA Show with a Cooktown Orchid Privymark. Dealers sold it instead.

It was also planned to be released at the cancelled Melbourne ANDA Show with a Common Heath Privymark. Dealers sold it instead.

It was also planned to be released at the cancelled Sydney ANDA Show with a Waratah Privymark. Dealers sold it instead.