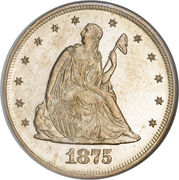 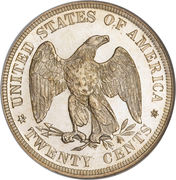 Seated Liberty with shield and Phrygian cap on pole, surrounded by 13 stars

William Barber (2 May 1807 – 31 August 1879) was the fifth Chief Engraver of the United States Mint from 1869 until his death. Barber is best known for his "Britannia"-inspired trade dollar design, and his adaptation pf the long-standing Seated Liberty design for use on the ill-fated 20-cent piece, which saw circulation only in 1875 and 1876.

Bullion value: 3.28 USD Search tips
This value is given for information purpose only. It is based on a price of silver at 728 USD/kg. Numista does not buy or sell coins or metal.