2 Euro General Council of the Valleys 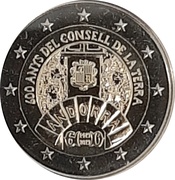 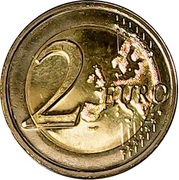 The design commemorates the 600th anniversary of the creation of the Consell de la Terra
(Council of the Land). It was a representative body created in 1419, predecessor of the Consell General (General Council),
the parliament of Andorra.
The design depicts the upper part of the entry portal of Casa de la Vall (the parliament’s old seat), with the coat of arms of
the country and a fragment of a window above it. Two compact groups of human faces on both sides of the design, as if
they were stones of the building, mean the cohesion of Andorrans as a social community united in history, institutions
and values.
The inscription ‘600 ANYS DEL CONSELL DE LA TERRA’ (600 years of the Council of the Land) at the top, and the name of
the issuing country ‘ANDORRA’ and both year dates ‘1419’ and ‘2019’ in the middle of the number ‘600’ below complete
the design.
The coin’s outer ring depicts the 12 stars of the European flag. 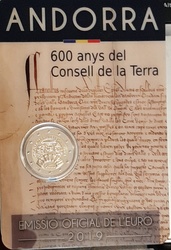