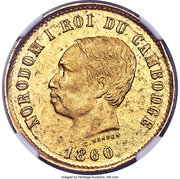 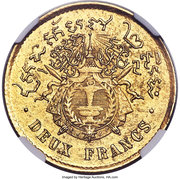 According to Lecompte, while these coins are dated 1860, they were struck in a private workshop in Brussels in 1875, and eventually, the press and dies were given to Norodom, allowing for the coins to be re-struck in Phnom-Penh. These first coins were never put into circulation, but were instead distributed by the Sovereign personally at important state events. After the passing of the Queen Mother in 1897, King Norodom retrieved the dies, and by 1899, additional coins were struck. These pieces can be distinguished from their Brussels counterparts by their irregular or granular appearance of the dies after being in storage for many years.

The coinage of Norodom I is traditionally divided into “original” and “restrike” issues struck at Birmingham, Brussels, or Phnom Penh. However, examination of mint records suggests that the date 1860 in fact represents the accession date of the ruler and not, as is custom, the date of issue. It is likely that the first issues of the series were struck in 1875, when new presses were delivered to Cambodia, and continued to be struck sporadically in both the native Cambodian and European mints until the late 19th century. The series has yet to be studied closely enough to allow individual issues to be assigned to the various mints, but it would appear that at least the pieces struck from very worn dies can be attributed to Cambodia.