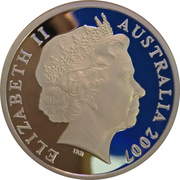 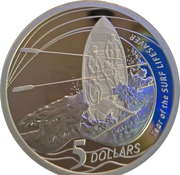 An image of lifesaving boat crashing through powerful surf

This is a special Fine Silver (.999) Proof NCLT issue by the Royal Australian Mint to celebrate the national 'Year of the Surf Lifesaver'.  The surf lifesaver is an Australian hero and part of our national identity. Since the first surf lifesaving club was formed at Bondi in 1907, these volunteers in their familiar red and yellow uniforms have saved more than 500,000 lives around Australia's beaches. Surf Life Saving Australia is our largest volunteer water safety organisation.