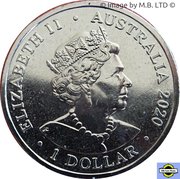 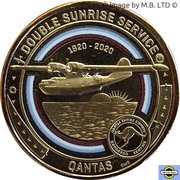 Within an inner ring of Blue, White and Red a depiction of an Catalina Flying Boat flying above a double sunrise. Outside the inner ring depictions of 4 aircraft flying around the ring. To the lower right in a small circle the early Kangaroo Logo of Qantas. The name of the Air Service at the top of the ring and the word QANTAS below. 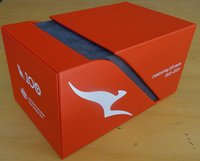 The fall of Singapore in February 1942 isolated Australia from the pre-war air route to Europe. Qantas Managing
Director Hudson Fysh proposed a new non-stop service between Perth and Ceylon across the lndian Ocean.
Five long-range US-built Catalina ﬂying boats were loaned to Qantas by BOAC. The Qantas lndian Ocean Service
operated between 1943 and 1945, taking an average of 27 hours per flight. They carried priority mail with three
passengers who received a certificate of membership to "The Rare and Secret Order of the Double Sunrise".

ln 1944, Qantas added Liberator aircraft on a "Kangaroo Service" over the Indian Ocean, with passengers receiving an "Elevated Order of the Longest Hop" certificate. The Liberator was the first Qantas aircraft to feature the kangaroo emblem, based on the Australian penny coin design.