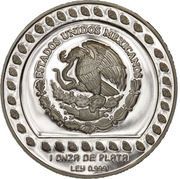 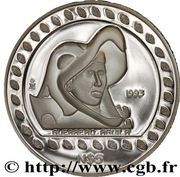 "Eagle warrior" coin series are of the few that made the "leap" between Old and New Pesos, their mintage continued on the new currency, the designs and ounce weight are the same but the face values changed as follows:
$25 - N$1
$50 - N$2
$100 - N$5

This value is given for information purpose only. It is based on a price of silver at 781 USD/kg. Numista does not buy or sell coins or metal.