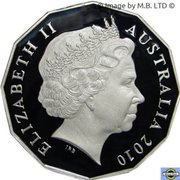 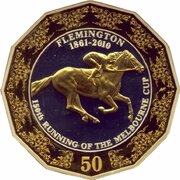 150th Running of the Melbourne Cup

This Fine Silver (.999) Gilded Proof NCLT coin was released by the RAM in a 2 coin Boxed Set. 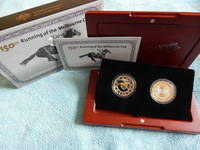 The design of this coin includes a Jockey on a Race Horse and commemorates the 150th running of the prestigious Melbourne Cup annual horse race which first ran in 1861. The race in Australia is held on the first Tuesday each November. All around the country many Australians stop work to watch the race.

A Copper-nickel coin was also released in a coincard to celebrate the same event.

Bullion value: 16.08 USD Search tips
This value is given for information purpose only. It is based on a price of silver at 883 USD/kg. Numista does not buy or sell coins or metal.