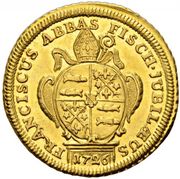 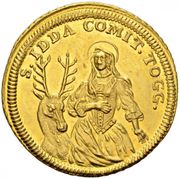 The coat of arms of the abbot in a simple cartouche on an oval shield standing on a pedestal with the date. Mitre on bishop's stole above the shield. Crosier behind.

Nimbate Saint Idda, Countess of Toggenburg, standing and facing. To her right, a stag with six-ended antlers with flames on ends.

On the Golden Jubilee of the Abbot and the alleged 500th anniversary of the death of St. Idda of Toggenburg.

The Benedictine Monastery of Fischingen was founded in 1138 by Bishop Ulrich II of Constance as episcopal monastery. The monastery offered shelter to pilgrims on their way from Constance to Einsiedeln.
Celebrated on 3rd November, Saint Idda was the daughter of the count of Kirchberg near Ulm and married to a count of Toggenburg. Legend has it that a raven stole Idda's wedding ring. The ring was found by a hunter in a bird's nest. When her husband noticed the ring on the hunter's hand, he accused Idda of infidelity. He had the hunter killed and rushed Idda out of the window of his castle. Because of her innocence she was miraculously saved by God. Later discovered in her hermitage, the error cleared up, but Idda wanted to dedicate her life as a recluse to God. Her penitent husband later had her locked in the monastery Fischingen, where she died in the call of holiness.

Bullion value: USD 402.73 Search tips
This value is given for information purpose only. It is based on a price of gold at 59 454 USD/kg. Numista does not buy or sell coins or metal.

» Buy coins from Abbey of Fischingen