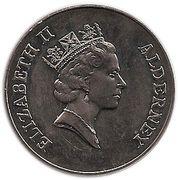 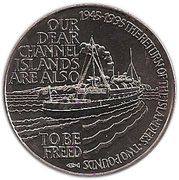 Lettering:
1945·1995 THE RETURN OF THE ISLANDERS·TWO POUNDS
OUR
DEAR
CHANNEL
ISLANDS
ARE ALSO
TO BE
FREED

Willem Vis (1936-2007), medalist and visual artist, was artistic director at Koninklijke Begeer in Voorschoten from 1957-1971 and afterwards he was an independent artist. He designed numerous medals, portrait plaques, tokens and commemorative coins.