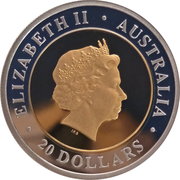 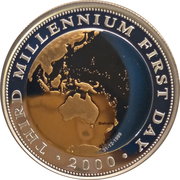 A satellite view of Earth. The gold centerpiece is divided into two areas separated by the International Dateline. The area to the west is experiencing the first day of the year 2000 with the pad-printed date 01-01-2000. The area to the east, which is still in the last day of 1999, is pad-printed in deep ocean blue with the date 31-12-1999. Gisbourne in New Zealand, widely acclaimed as the first official millennium city, is also highlighted.