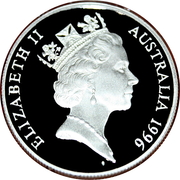 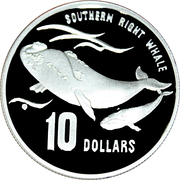 A Southern Right Whale and her calf

This coin is a piedfort version of KM#314.1 and is part of a series of four Sterling Silver (.925) Proof coins released by the RAM to highlight Australia's Endangered Species.

A protected species, the Southern Right Whale (Eubalaena australis) can be seen in waters along the southern coastline pf Australia from Perth to Sydney. Recently reclassified as "Vulnerable", it exists in very limited numbers and is still under threat of extinction.
Growing up to 18 metres in length and weighing up to 80 tonnes, it is a slow swimmer, making it easy prey for whalers. Usually black in colour, some have white spots on their head and back. Large callosities along the jaw identify individual animals.

Bullion value: 30.70 USD Search tips
This value is given for information purpose only. It is based on a price of silver at 830 USD/kg. Numista does not buy or sell coins or metal.