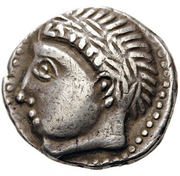 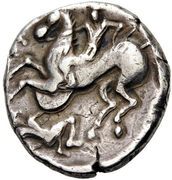 Laureate head of Apollo to left.

"The imitations of Patraos are among the earliest of all Balkan imitations of Greek coins. Specimens of this type appeared in the great Paeonian Hoard (IGCH 410), buried c. 315, and it seems very likely that they began to be produced during Patraos’s lifetime, but ceased soon afterwards. All evidence seems to indicate that the Patraos imitations, apparently issued by the Agriones living between the Strymon and the Axios in southern Bulgaria, preceded the more numerous imitations of Philip II, which began to be produced in considerable numbers by the Getae in Dacia to the north." (Nomos auction catalog description, Obolos Web Auction 4, Lot #39, 21.02.2016)