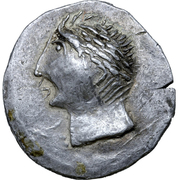 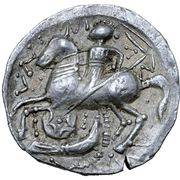 Imitation of Tetradrachm of Patraos from Paeonia.

The imitations of Patraos are among the earliest of all Balkan imitations of Greek coins  (c. 340-315 BC). 34 specimens of this type appeared in the great Paeonian Hoard (IGCH 410), buried ~315 BC. It is likely that they were produced during Patraos’s lifetime, at the same time with the originals, but ceased soon afterwards. Attributed to the Agriones celts living between the rivers Strymon and Axios in southern Bulgaria (Gerassimov 1963). They preceded the more numerous imitations of Philip II, produced by the Getae in Dacia to the north. (Source: CCCBM I)