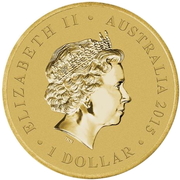 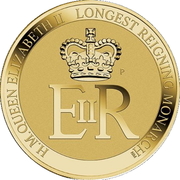 Struck by the Perth Mint but issued exclusively by Australia Post in a PNC. The Perth Mint and Australia Post are honoured to commemorate the occasion with the release of a stunning stamp and coin cover, which is set to be a timeless reminder of this historic milestone.

Two stunning stamps featuring Her Royal Highnesses are attached to the envelope. The official Australia Post 70 cent stamps are postmarked for the first day of issue. The envelope is endorsed with Australia Post’s Seal of Authenticity and official number.

Queen Elizabeth II is Britain’s 40th monarch since William the Conqueror was crowned in 1066. Her coronation took place on 2 June 1953, more than a year after the death of King George VI. On 9 September 2015 Queen Elizabeth II passed a historic milestone, becoming the longest reigning monarch in British history. She bypassed the previous record of 23,226 days, 16 hours and 23 minutes (63 years and seven months), set by her great-great grandmother Queen Victoria.