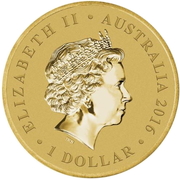 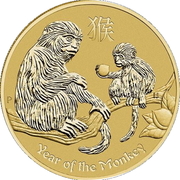 The reverse of the coin depicts an adult monkey and a baby monkey sitting in a peach tree. The baby is holding a peach, which is symbolic of longevity and immortality. The Chinese character for ‘monkey’ and the inscription ‘Year of the Monkey’ also appear in the design with The Perth Mint’s traditional ‘P’ mintmark.

Each coin is housed in a beautifully designed card with a circular window revealing the coin’s reverse and obverse designs. Affixed to the envelope are two official Australia Post $1 and $3 stamps.  The stamps are postmarked for the first day of issue and the envelope includes Australia Post’s Seal of Authenticity and official number. The stamps depict a stylised monkey image and the Chinese character for monkey.